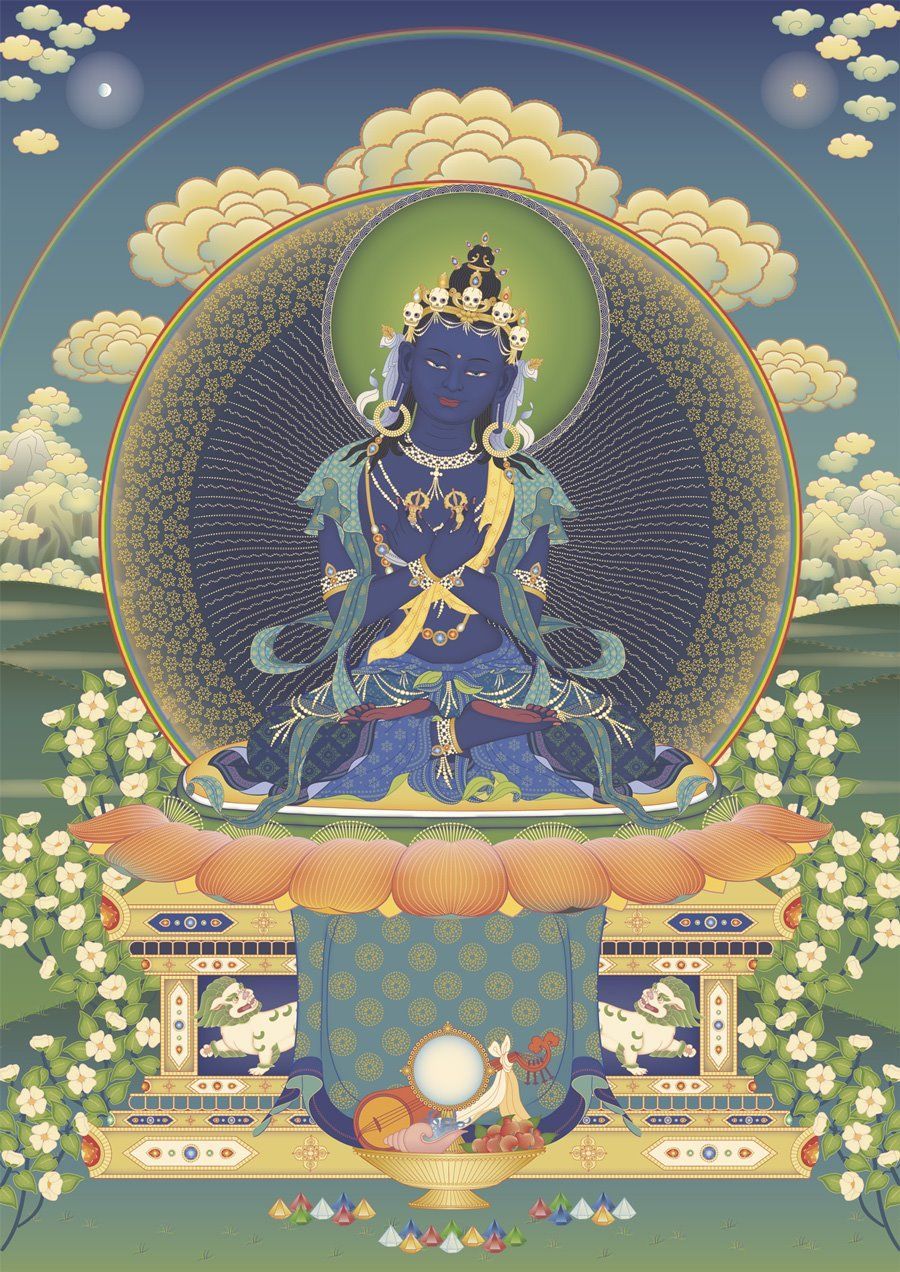 The Kagyud schools of Tibetan Buddhism trace their origin back to Buddha Shakyamuni.

The most important source for the specific practices that characterize the Kagyu order is the great Indian yogi Tilopa (988-1069), one of the 84 mahasiddhas of India, who first developed the spontaneous insight of enlightened realization. He gained this realization through the methods that were taught by the historical Buddha Shakyamuni to his closest students, methods that continued to be practiced during the time of Tilopa.

In turn, the realization of these masters was passed down to their disciples through the great forefathers of the lineage:

Indian mahasiddha Naropa, Marpa-the great translator, Milarepa-the greatest yogi of Tibet, and then to Gampopa-whose coming was prophesied by the Buddha. The lineage of the Kagyu emphasizes the continuity of oral instructions passed on from master to student, from whence the name "Kagyu" derives.

Deshek Phakmo Trupa Dorje Gyalpo (1110-1170), who was one of the main students of Gampopa and is especially known for his realization and transmission of the Mahamudra lineage, founded this lineage of the Kagyu school. He also founded a monastery in the Phakmo area, which was later called Densa Thil. Many additional schools of Kagyu lineage grew from Phakmo Trupa's disciples.

II. The Kamtsang or Karma Kagyud

The First Karmapa, Düsum Khyenpa (1110-1193), who was one of the main students of Gampopa, founded this lineage of the Kagyu School. In 1139 C.E., at the age of thirty, Düsum Khyenpa met Gampopa and became his disciple. This tradition has remained strong and successful due mainly to the presence of an unbroken reincarnate line of the founder, the successive Karmapas. All the successive incarnations of the Karmapas are very well know in every part of Tibet and among all Tibetan Buddhist practitioners, for their accomplishments in meditation, scholarship, and the activities of benefiting beings.His Holiness the Sixteenth Gyalwa Karmapa, Rangjung Rigpe Dorje (1924-1981) was the head of the entire Kagyu tradition. His incarnation, His Holiness the Seventeenth Gyalwa Karmapa, is now living in India as an exiled Tibetan refugee. The Karma Kagyu lineage has played a very important role in preserving and continuing, not only the Karma Kagyu, but also the entirety of the Kagyu transmissions that have been passed down from Marpa, Milarepa, and Gampopa. The Karma Kagyu lineage is the most influential of the Tibetan buddhist lineages outside Tibet, and this tradition is studied and practiced all around the world today.

Lama Zhang, otherwise known as Yudakpa Tsondu Dakpa (1123-1193), whose main teacher was Wangom Tsultrim Nyingpo, a student of Gampopa, founded this tradition. He is also the founder of Gungthang monastery and had many learned students.

Barom Darma Wangchuk, a student of Gampopa, founded this tradition. He was also the founder of Barom monastery in the northern Latö region of Tibet and the name of the tradition came from this.

The eight additional or sub-schools of the Kagyu lineage have developed within the Phaktru Kagyu.

2. The Drukpa Kagyud was founded by Drupchen Lingrepa Pema Dorje (1128-1188), a student of Phakmo Trupa, and his disciple Chöje Tsangpa Gyare Yeshe Dorje, (1161-1211). They founded the first seat of this lineage, Namdruk Monastery in central Tibet. Later, Kunkhyen Pema Karpo (1527-1592) founded the Druk Sang-ngak Chöling in southern Tibet, which became the main seat of this lineage. Kapgön Drukchen Rinpoche, who lives in Darjeeling, India, is the present head of the lineage. This lineage, adopted as the state religion of the Kingdom Of Bhutan, originally was brought there by the great Drukpa Kagyu master Shaptrung Ngakwang Namgyal and flourished in Bhutan throughout the centuries. His Holiness Je Khenpo of Bhutan and the present King of Bhutan Jigme Senge Wangchuk are the head of Drukpa Kagyu in Bhutan.

5. The Trophu Kagyud was founded by Rinpoche Gyatsa, nephew and a student of Phakmo Trupa, and his disciple Trophu Lotsawa Champa Pal (1173-1225). Trophu Lotsawa founded the Trophu monastery and institute in the Tsang region of central Tibet and the name of the lineage derives from this.

6. The Shuksep Kagyud was founded by Gyergom Tsultrim Senge (1144-1204), who was a student of Phakmo Trupa. He founded the Shuksep monastery in 1181 C.E., in the Nyephu area in the Chushur region of central Tibet, from whence comes the name of the lineage.

The Shangpa Kagyud, one of the main Kagyu lineages, was founded by the great yogi, Khyungpo Nyaljor (978-1079). Khyungpo Nyaljor traveled to Nepal where he met Acharya Sumati and received training as a translator and then traveled to India. He received teachings from one hundred and fifty scholars and yogis and mastered the vajrayana teachings. Khyungpo Naljor's main teachers are Sukhasiddha, Rahulagupta and Niguma, the consort of Naropa. When he returned to Tibet, he received the monastic vows from the Kadampa master, Langri Thangpa.

Khyungpo Naljor established many monasteries in the regions of Phenyul and the "Shang" area of the Tsang region of Tibet, and therefore, the lineage he founded came to be known as the "Shangpa" Kagyu. He continued his activities of teaching and propagating the Shangpa Kagyu lineage for over thirty years in Tibet. He had many students and passed down the lineage he received, which continues today.

Some of the main practices of the Shangpa Kagyu lineage are Chakrasambhava, Hevajra, Mahamaya, Guhyasamaja, the Six Doctrines of Niguma, Mahamudra, the Six-armed and the White Mahakala, and others. Jamgon Kongtrul the Great made a tremendous effort to revive and preserve the lineage of the Shangpa Kagyu, which is now flourishing in Tibet and outside through the blessings and aspirations of Jamgon Kongtrul and the Sixteenth Karmapa. Two of the main contemporary Shangpa Kagyu masters are the Very Venerable Kalu Rinpoche (1905-89) and Bokar Rinpoche.