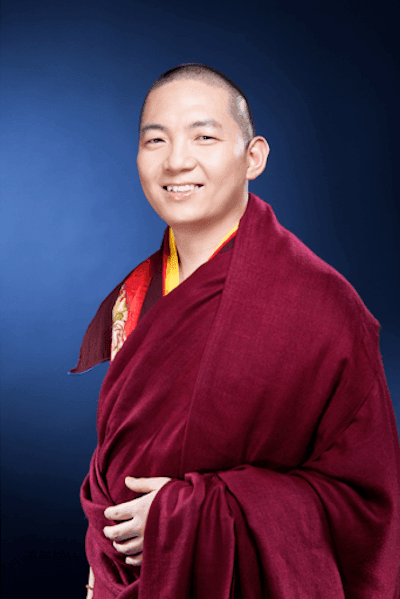 A significant event took place in Gangtok in October when His Eminence the 12th Kenting Tai Situpa enthroned the four year old Gyalton Tulku Rinpoche at the Gangtok Palace Monastery.

Gyalton Rinpoche is an incarnation of the religious head of Chungpo Monastery in Kham.

The later Venerable Gyalton Rinpoche Ugyen Jigme Choekyi Singee was born in Chungpo Gyalton Valley in the Kalachakra Calendar Earth Monkey year, 1908. From an early age he pursued studies in Tibetan Buddhism, reading and writing. He was one of the principal disciples of the 11th Kenting Tai Situpa, Pema Wangchuk Gyalpo and Dzongsar Khyentse Choekyi Lodoe.

When His holiness the 16th Gyalwang Karmapa received teachings from the 11th Kenting Tai Situpa, Gyalton Rinpoche was also present receiving the teachings. H.H. the 16th Karmapa awarded Gyalton Rinpoche the title of Khenchen of the Kagyupa sect for his high attainment and learning.

Gyalton Rinpoche accompanied H.H. the 16th Karmapa during His Holiness' visit to the holy places in India in the year 2500 Buddha Jyanti (1956).

Gyalton Rinpoche was appointed as Spiritual Guru to the Chogyal (the King) of Sikkim by H.H. the 16th Karmapa at the request of the late Chogyal Sir Tashi Namgyal of Sikkim. Rinpoche gave many Empowerments and Reading Transmissions in many monasteries throughout Sikkim and was very highly respected by the people of Sikkim who were deeply devoted to him. He remained in the Royal Palace Monastery until he passed away in the Kalachakra Calendar Iron Dog Year, 1970. His monks continued their routine in the Royal Palace Monastery and awaited his reincarnation.

In the year 1983 the 12th Kenting Tai Situpa recognized the son of Kunzang Topden and Yangzom of the Martam family, an eminent Sikkimese family, as the new incarnation of the late Gyalton Rinpoche. The previous Gyalton Rinpoche had been one of the present Tai Situpa's teachers, along with Thrangu Rinopoche, Kalu Rinpoche and the previous Sangye Nyenpa Rinpoche.

The initial ceremonies of the enthronement which are bestowing the name and first recognition ceremonies took place at Rumtek Monastery, the main seat of the Kagyupa in India. The 12th Kenting Tai Situpa led the group before the stupa of the late H.H. 16th Karmapa at Rumtek and after the necessary ritual was performed, the group proceeded to the Gangtok Palace Monastery where they were received by the Royal Family and noble families of Sikkim, as well as government officials and a large number of Sikkimese and nearby devotees. The enthronement ceremony was conducted by the 12th Kenting Tai Situpa during which time the young Tulku consistently beat on a drum from the beginning to the end of the ceremony. Prince Wangchuk, the Royal Grandmother and other members of the Royal Family, officials and disciples all paid respect after the young Gyalton Rinpoche was formally enthroned.

Gyalton Rinpoche remained in the Royal Palace Monastery learning Tibetan reading and calligraphy under Gyalton Ghelong who was one of the main disciples of the previous Gyalton Rinpoche. He was appointed as his main tutor by the 12th Kenting Tai Situpa.

In the year 1989 the young Rinpoche came to Palpung Sherab ling, the main seat of Kenting Tai Situpa in India for the time. Here he remained under the guidance of his supreme guru the 12th Kenting Tai Situpa and other gurus such as the Very Venerable Salshey Rinpoche for about two years. He also attended a regular English medium school and university for about ten years and took up science as his main stream. While in school, Rinpoche studied different languages such as English, Hindi and Nepali.

In February 2002, he once again returned to Palpung Sherab Ling to undergo higher Buddhist studies under the guidance of his supreme guru, the 12th Kenting Tai Situpa and other gurus. He is learning and mastering the different rituals, Buddhist philosophy, the lama dance and the different musical instruments used in Tibetan Buddhist rituals. He has been appointed the Vajra Master of Palpung Sherab Ling by Kenting Tai Situpa and has been undertaking this responsibility for the past four years.