Legend tells that in a previous eon, in a former life as an accomplished yogi, the Karmapa attained the eighth level or bhumi of the bodhisattvas. At this time, 100,000 dakinis (female buddhas) manifested their hair as a crown, and offered it to the Karmapa as a symbol of his accomplishment.
Dusum Khyenpa, the 1st Karmapa, was regarded as an emanation of that yogi and his appearance was predicted by the historical Buddha Shakyamuni in the Samadhiraja Sutra:
"A bodhisattva with the lion’s roar will appear. He will use the power he achieved in deep meditation to benefit countless beings. By seeing, hearing, touching or thinking of him, they will be led to happiness." 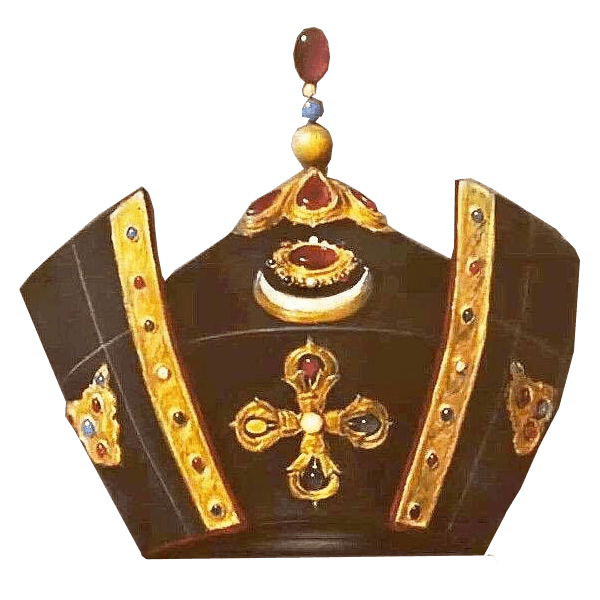 Hagiographies of The Gyalwang Karmapa report that long time ago, in a former life as an accomplished yogi,

His Holiness attained the realisation of the eighth level of the Bodhisattva Path.
At this time, 100,000 dakinis manifested a black crown made of their hair and offered it to The Karmapa as

a symbol of his accomplishment.

Düsum Khyenpa, the 1st Karmapa, was regarded as an emanation of that yogi.

In fact, his incarnation in Tibet was predicted by the historical

Buddha Shakyamuni in the "Samadhiraja Sutra":

"Two thousand years after my passing,
The teachings will spread in the land of the red-faced ones,
Who will be the disciples of Avalokita:
The bodhisattva Simhanada, known as Karmapa, will appear.
Possessing mastery over samadhi, he will tame beings
He will use the power he achieved in deep meditation
to benefit countless beings.
By seeing, hearing, touching or thinking of him,
they will be led to happiness."

In preparation for the ceremony the Karmapa meditates to become inseparable with Chenrezig, the Buddha of Compassion. A mandala offering is made, followed by the seven branch prayer. This is to accumulate good merit for the ceremony that ensues. The Karmapa then places the crown on his head while reciting the mantra 'Om Mani Pädme Hung', transmitting blessings to each participant in the ceremony to the extent that they are capable of receiving them. It is said that by merely seeing the Black Crown during the ceremony, one will become a first bhumi bodhisattva within three lifespans. This is one of the key reasons why the Black Crown is so important to the Kagyu lineage.
A brief description of the origin of the physical crown:
The Karmapas were traditionally the teachers of the successive Ming Dynasty Emperors of China. When the 5th Karmapa, Dezhin Shegpa, met the Chinese Emperor Yung Lo, the Emperor, through his devotion and spiritual realization, was able to perceive Karmapa in the Sambhogakaya form of Vajradhara (Tib. Dorje Chang), wearing a black crown on his head. The Karmapa explained to the Emperor that he could see the 'Vajra Crown', the power-field of wisdom-energy that always stays above the Karmapa's head. The emperor offered to have a physical replica made so that others could receive its blessing. A crown encrusted with precious stones and topped by a huge ruby was commissioned, and using this, the 5th Karmapa started the tradition of the Black Crown Ceremony which was performed by successive Karmapa incarnations up to the time of the 16th Karmapa, Rangjung Rigpe Dorje.

The Origin of the Vajra Crown by Lama Karma Wangchuk

Let me briefly recount the story of the Black Crown. When the Emperor Yung Lo met the 5th Karmapa Dezhin Shegpa numerous miracles and signs appeared in the sky for the 18 days that Karmapa gave public teachings. Famous Chinese painters and calligraphers of the period copied these signs daily and wrote descriptions of them in the four main languages of the Chinese Empire Mongolian, Mandarin, Tibetan and Turkic. They form the basis of our understanding of how the Emperor came to give the Black Crown to the Karmapa.
After several days of teachings, the Emperor said to Karmapa, Whenever you perform a ceremony of blessing, you always appear to me in a special way. Your body is in the form of Vajradhara and you are wearing a kind of black turban or crown on your head.
Karmapa responded that it could be that when the body of a great bodhisattva is teaching in human, or nirmanakaya form, this body can also be simultaneously manifested in sambhogakaya, or ethereal form.
To further answer the emperor's question, Karmapa explained that many eons in the past, in a previous life as a cave-meditator, Karmapa attained the eighth bodhisattva bhumi. Then, a hundred thousand wisdom dakinis cut their black hair and offered it to Karmapa as an offering. They manifested their hair as a crown that they placed on his head and enthroned Karmapa as a Buddha for their sambhogakaya land. The 5th Karmapa said that the 1st Karmapa, Dusum Khyenpa was an emanation of that sambhogakaya Buddha for our world.
The emperor marveled at this story, and in his devotion offered to have a replica of this crown made for Karmapa: If I make a similar crown and offer it to you, can you give the blessing of the sambhogakaya Buddha to sentient beings? Karmapa responded, Yes, the bodhisattva's blessing depends on his having attained the wish paramita--that whatever he wishes for sentient beings will come true--so this is possible.
The emperor was very pleased. He left Karmapa, and ordered the most skilled craftsmen to make a crown studded with precious stones and crowned by a rare ruby the size of a human fingertip. The 5th Karmapa accepted this gift and began the tradition of the Black Crown Ceremony. Since then, when any Karmapa performs this ceremony, he meditates in the form of a sambhogakaya Buddha and thus gives a unique empowerment of samadhi and wisdom to those in attendance. Karmapas from the 5th through the 16th wore this crown and gave this blessing through the ceremony.

The Qualities of the  Vajra Crown - Understanding of Its Symbolism:

1. The Unchanging Dharmata: The Color of the Vajra Crown is dark blue, representing the unchanging nature of reality, dharmata, of all phenomena. The realization of enlightenment is also unchanging, like space, and that basic space is represented here by the dark blue color.
2. The Three Kayas: the Three Points of the Vajra Crown, one in the middle, and two at the sides, represent the spontaneous presence of the three kaya buddhahood: 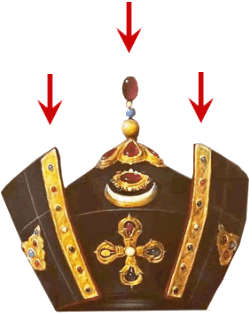 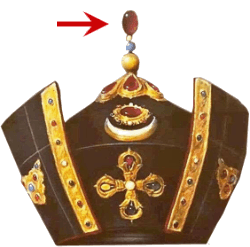 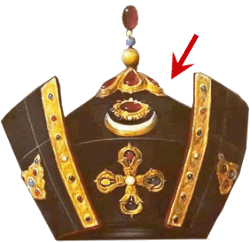 5. The Buddha Activities: the Cloud Ornaments decorate the left and right side of the crown with beautiful clouds, representing the immeasurable and unbiased rain of wisdom and compassion, which is the activities of the buddhas and tenth level bodhisattvas, in benefitting all sentient beings. The tenth bhumi of the bodhisattva path is also called the "cloud of dharma." 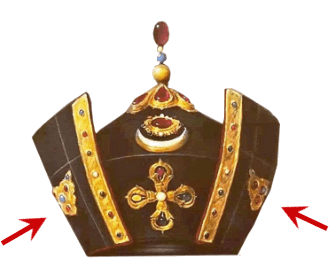 6. The Four Enlightened Activities: the Crossed Vajra or Dorje Gyatram ornately beautifies the front of the crown, containing five different colors of precious gems, representing the five colors of the buddha families. The prongs of the vajra represent the four enlightened activities of pacifying, enriching, magnetizing and destroying. 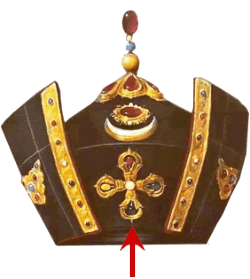 7. The Four Immeasurables: the Base, made up of the four-cornered quadrilateral area forming the square or v-shaped base for the crossed-vajra ornament, represents the four immeasurables: 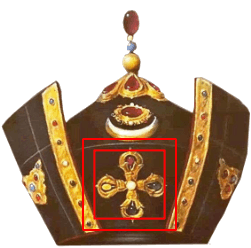 This is how His Holiness leads beings through the path to the fruition of complete awakening.