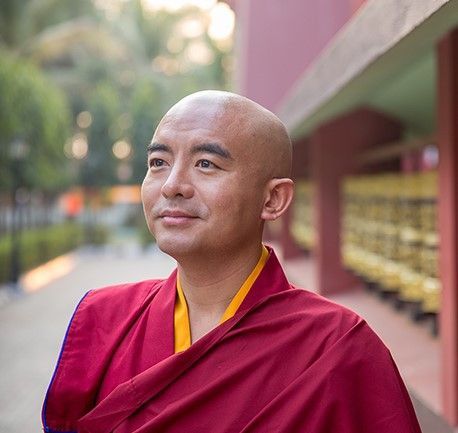 Yongey Mingyur Rinpoche was born in 1975 in a small Himalayan village near the border of Nepal and Tibet. Son of the renowned meditation master Tulku Urgyen Rinpoche, Mingyur Rinpoche was drawn to a life of contemplation from an early age and would often run away to meditate in the caves that surrounded his village. In these early childhood years, however, he suffered from debilitating panic attacks that crippled his ability to interact with others and enjoy his idyllic surroundings.

At the age of nine, Rinpoche left to study meditation with his father at Nagi Gonpa, a small hermitage on the outskirts of Kathmandu valley. For nearly three years, Tulku Urgyen guided him experientially through the profound Buddhist practices of Mahamudra and Dzogchen, teachings that are typically considered highly secret and only taught to advanced meditators. Throughout this time, his father would impart pithy instructions to his young son and then send him to meditate until he had achieved a direct experience of the teachings.

When he was eleven years old, Mingyur Rinpoche was requested to reside at Sherab Ling Monastery in Northern India, the seat of Tai Situ Rinpoche and one of the most important monasteries in the Kagyu lineage. While there, he studied the teachings that had been brought to Tibet by the great translator Marpa, as well as the rituals of the Karma Kagyu lineage, with the retreat master of the monastery, Lama Tsultrim. He was formally enthroned as the 7th incarnation of Yongey Mingyur Rinpoche by Tai Situ Rinpoche when he was twelve years old.

In this short guided meditation, Tibetan Buddhist meditation master Yongey Mingyur Rinpoche gives simple instructions for bringing awareness to the body, sensory experience, space, and finally to awareness itself. The main point of the practice is to fully embrace the present moment with mindfulness and awareness.

In this short video, Mingyur Rinpoche speaks of how to overcome laziness in our meditation practice through building new habits. He also explains how this is linked to one of the biggest hindrances in practice for long-term practitioners.

Many of us are very self-critical, and whenever negative emotions appear, we fight or suppress them. This leaves us feeling bad afterward. In this short video, Mingyur Rinpoche teaches us how criticizing ourselves creates more problems. He shows us how we instead can find wisdom within our emotions and come to see that our true nature is already good.

In this short video recorded in India, Mingyur Rinpoche gives the Tergar community an in-depth look at the first few weeks of his retreat. He talks in inspiring terms about how he worked with the expectations he brought with him on retreat and the near-death experience that transformed his resistance and attachment.