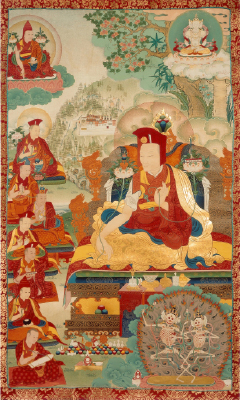 Jamgön Kongtrul the Great, Lodrö Thaye, was born in the village of Rong-gyap in Derge, in east Tibet.
The coming of this great master was prophesized by the Buddha Shakyamuni, in the Samadhiraja-sutra, as well as by the Great Indian Vajra Master, Padmasambhava, in many of his termas (hidden teachings, for later revelation).

He studied and mastered the teachings of the Buddha in general and tantrayana in specific including the Bön religion of Tibet.

Among his many teachers, his primary teachers were the Fourteenth Karmapa, Situ Pädma Nyinje Wangpo, the Great Jamyang Khyentse Wangpo, and many other masters of the time.

He not only became one of the greatest masters and the lineage holder of Kagyud School but of all four Schools of Tibetan Buddhism as well as the Bön religion.

Lodrö Thaye co-founded the non-sectarian movement in Tibet with the Great Khyentse in 19th century.

He became the teacher of the fifteenth Karmapa Khakhyab Dorje, giving him the full Kagyu teachings.
He is renowned as an accomplished master, scholar, writer, poet, and artist, and authored and compiled more than 100 volumes of scriptures.
Among these, the best known is the Five Treasuries, made up of:
He became the principal teacher of and gave the full transmission of the lineage to the Fifteenth Karmapa, Khakhyab Dorje.